Chautauqua Institution is a not-for-profit educational center located beside Chautauqua Lake in Southwestern, New York.  It acts as a 9-week summer retreat, where more than 100,000 people attend a variety of scheduled public events. During this time period, courses are offered in art, music, theater, dance and writing.


The Challenge at Hand:

On the ground of the Institutions lies a historic amphitheater, which has seen over 140 years of performances, from world-renowned musicians, heads-of-state and other influential members of society.


Because of its age, the construction of a modernized version of the amphitheater was proposed, which involved a complete demolition of the current amphitheater with the construction of an entirely new one immediately following. As with any structure as rich in history as the Chautauqua Amphitheater, the plan came under heavy scrutiny from the NYS preservation society, Chautauqua residents and institute patrons alike.


It was requested that an updated model be constructed to reflect the design changes in order to act as an educational tool for all parties involved, and in turn sell the design. Laser Modeling 3 was contacted and provided with drawings of plans by the architectural firm, Serena & Sturm Architects, in order to create the model. Serena & Sturm Architects are located in downtown Chicago, IL, and are one of the firms working closely with the Institution on the new theater. Ultimately, Laser Modeling 3 took on the challenge of bringing the vision of the new amphitheater to life with an architectural scale model.

Creation of the architectural scale model was broken up into three phases: white model, actual model and landscape changes. First, a white model of the amphitheaters “back-house” needed to be constructed for the purpose of making sure that the model of the building would fit in its proper location and look proportionally accurate. 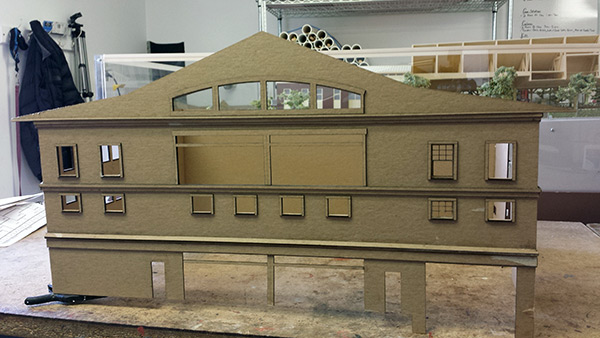 Once the size was perfect, we began construction of the final model.

The core of the building was made out of laser-cut acrylics which were used to provide an extra level of strength, while Wood Bracing was added to the inside. 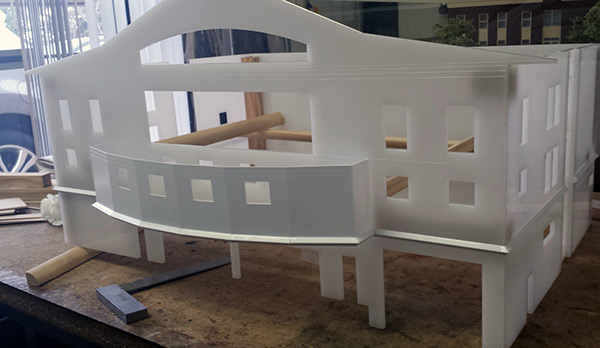 On top of the acrylic “base layer,” we applied a veneer layer of basswood. The veneer itself was painted the requested color, and staggered shingles were etched into it where appropriate. This layer was applied to give the model its realistic appearance and texture, as the building was to be made primarily out of wood. 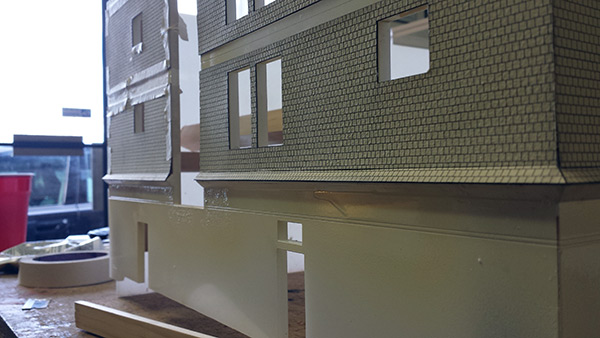 The finishing touches that make architectural models unique were then applied, including all of the windows, designed, burnt out of acrylic and installed, shake shingles were applied to the third floor, the 2nd floor porch and railings were installed, and a stone layer was laid on the base floor to create this realistic architectural model. 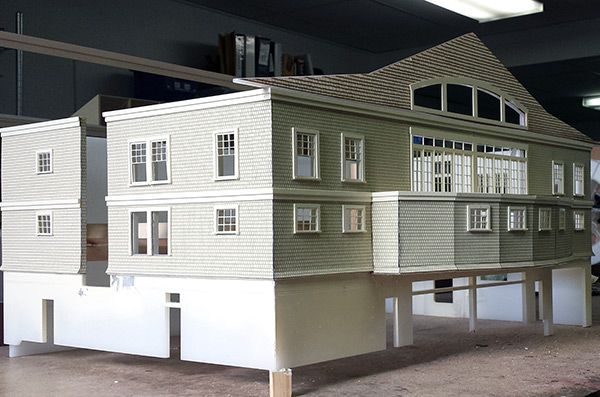 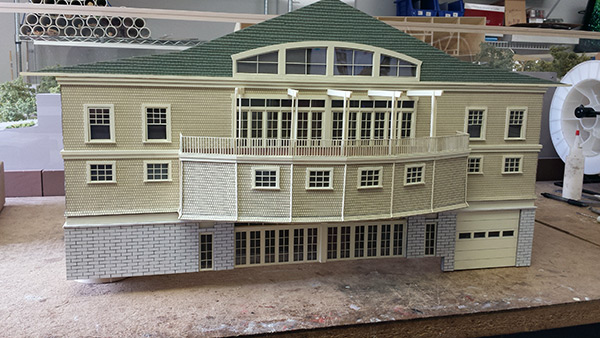 The roof was then constructed and  finally, the model was positioned into place, and the bottom porch was constructed. 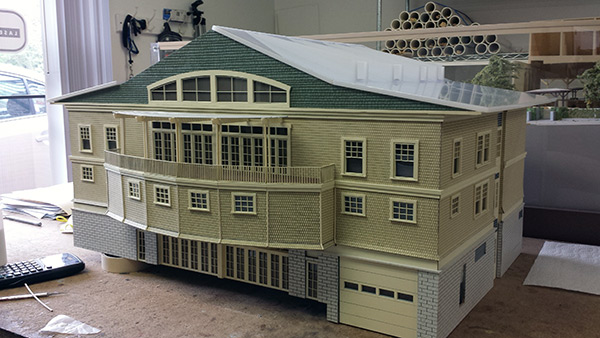 Next we moved onto the landscaping phase. This phase had its own unique set of challenges to overcome.


There were numerous different species of trees, grasses, bushes and plants that needed to be recreated, as well as a number of different rock types, all with varying sizes and shapes. This called for custom molds. Plaster was poured in to recreate the stones, which were then stained and painted the appropriate colors. 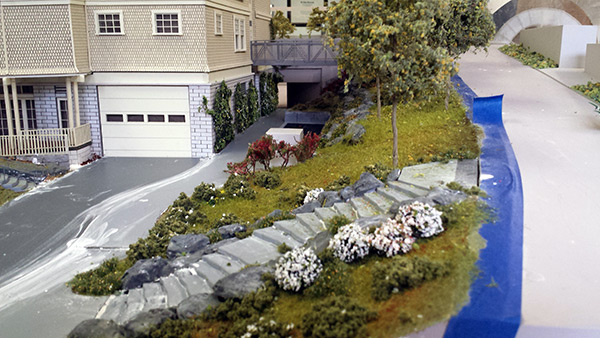 We then had to carve bio-swells into the base in front and around the side of the building. In real life, these bio-swells act as collection areas for water during bad storms. We layered rocks around the sides and bottoms of the bio swell and then finally added a liquid material to the bottom to mimic water. 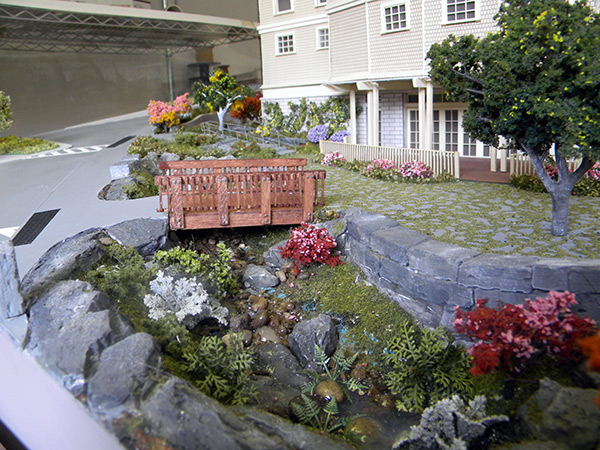 Finally, all of the trees were installed in their proper position and we planted all of the bushes and wrapped vines around the base of the building. 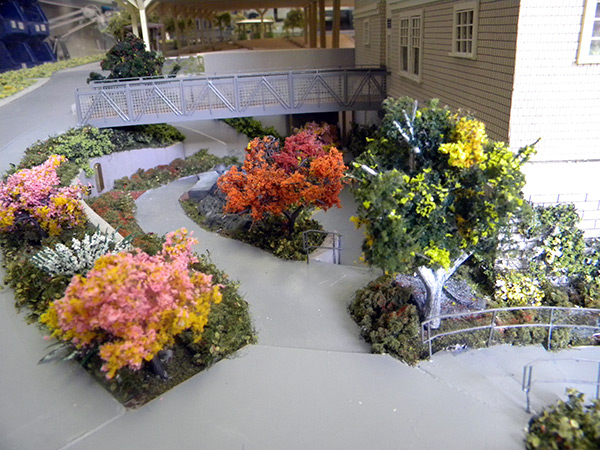 Once the landscaping was complete, we finished all of the driveways and sidewalks. 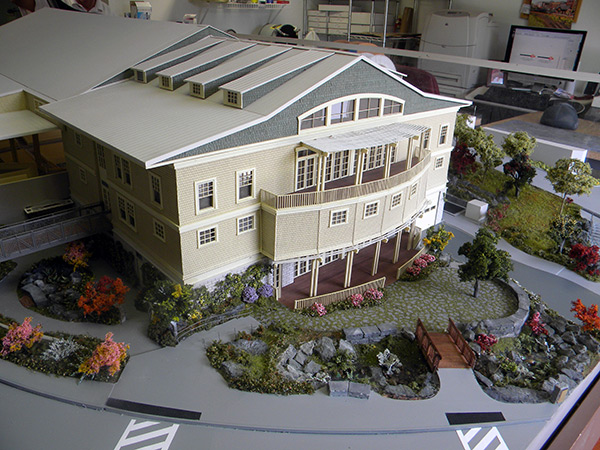 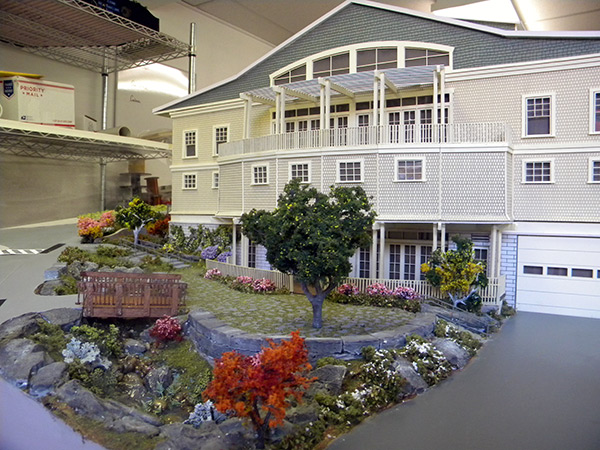 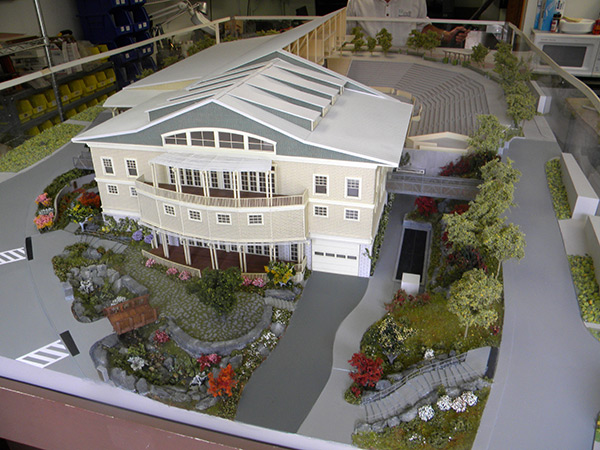 
Once complete, the entire architectural model measured 6’x12.  Besides being very large, the model was extremely heavy, weighing well over 800lbs. Laser Modeling 3 personally delivered the architectural model back to the Institution, which took over 8 workers. Once the model arrived at the institution, it was set up inside of the library, where it immediately drew the attention of the patrons.  Going forward, the model was to be used as a sales and educational tool for investors and the public. 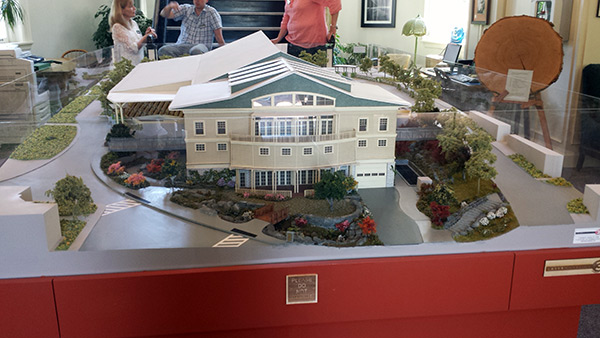 On August 30th 2015, the project was approved by the Chautauqua Institution's board. The model ended up playing an integral role in the project being approved, leading the way for $30 million to be raised for the project.